India’s cultural heritage has drawn lots of travellers from across the world. TAJ lake palace Udaipur is one of the leading five star hotel, embraced with the essence of the royal luxury and lifestyle and memorable interiors. Every room is endowed with the appearance of the romantic and lavish background across the palace. It is surrounded by the beautiful backdrop of Aravalli Mountains and city palaces which is adding charms and charisma which is appealing to the palaces.

In previous years it was known as Jag Niwas which is also another luxury hotel. It was built during the year of 1743-1746 by Maharana Jagat Singh II (who is 62nd was considered as the royal summer palace and was originally called after the founder). The palace was constructed facing east which allowed their inhabitants to pray to Sun god at the cracking of the dawn. Further the successive rulers used this remarkable haven for their summer resort where they used to hold the regal durbars in its courtyards which were lined in columns of fountains, gardens and pillared terraces. It has shown its presence in one of the James Bons flick's “Octopussy”.

Further with regards to its accommodations and rooms, it comprises of around 66 rooms which includes around 17 suites. They offer the accommodation of rooms in five different categories- which could be mentioned as luxury rooms which is built over an area of around 300 Square feet area, they further have the views of the contemporary along with traditional artistry. Every room is providing the exotic look of the Lake, courtyard and the ancient retreat of the palace.

Palace rooms - they depict medieval Indian style of architecture and are built over an area of around 400 Square feet. They have high ceilings with a luxurious royal decor.

Royal suites - they cover an area of around 550 to 650 square feet, whereas each suite is vibrant with the traditional and ethnic interior which includes the antique wooden fans. Grand Royal suites- they are designed to suite the demands of the guests who are visiting them. It covers an area of around 1000 to 1200 square feet and also provides an overlook to the beauty of nature across Udaipur.

Grand presidential suites - it incorporates the artistry of Mewar’s ethnic culture and also includes the rich literary books in their lavish libraries. Their balcony provides a magnificent view of the sunset.

You can also enjoy the multiple Indian and International cuisines. There are different collections of vintage wines, cocktails, spirits and beverages etc. 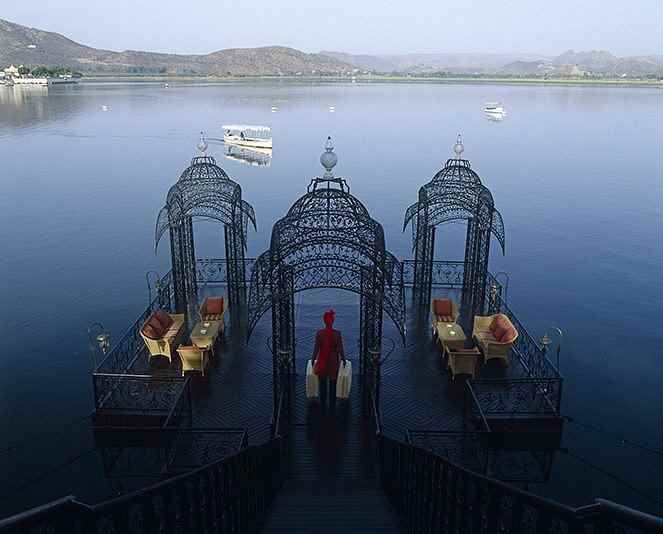 The hotel is around 24.8 KM away from Udaipur airport and it just takes 30 minutes driving to the location. The upper room of the palace is perfect circle and is about 21 feet in diameter. Its floor is inlaid with black along with white marbles, the walls are ornamented with some kind of niches and decorated pieces of different stones due to which the dome is beautiful in its form. In 2000, the restoration work was carried out for the palace. The “Royal Butlers” who are working in the palace are direct descendants of original palace retainers.