Udaipur City Palace might be one of the most eye catching buildings known for its lavish and extraordinary style but there is something else besides it which leaves a soothing impact on the spectator. Yes, it's Pichola Lake. The same lake where James Bond was spotted on his boat. 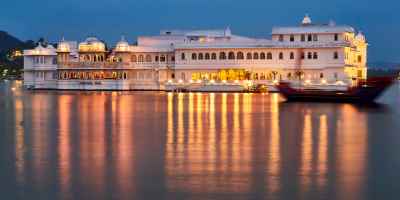 The lake has also been mentioned in Rudyard Kipling's "Letters of Marque". Located in the heart of city Udaipur in Rajasthan, lake Pichola is one of the most beautiful, oldest and largest lakes of Udaipur.

Lake Pichola is an artificial lake which was built by Pichhu Banjara during the reign of Maharana Lakha.Built in the 1362 AD, Lake Pichola was further enlarged by Maharana Udai Singh, who is better known as the founder of Udaipur. A stone masonry dam was also built on the shore of the lake.

One of the chabuttras (raised platform) was also built to commemorate a natini (rope walker). As per a Legend, Maharana Jawan Singh had promised a 'Natani' that she would be gifted half of the kingdom of Mewar if she managed to cross the lake from a village on the west bank of the city to City palace on the east end.

She was tricked as quoted by the legends that before she could reach the other end, the rope was cut and she drowned in the lake cursing the Maharana family that they would be devoid of any direct descendants which came true as six ranas of the seven Jawana are said to be adopted.

The primary source of water in its times and its role as a fortification, lake Pichola also offers scenic and tourist attractions within its vicinity. There are four islands present on the lake which are listed as below:

Jag Niwas- Built in the 1740's under the reign of Maharana Jagat Singh II. With ornamental walls, inlaid marbles and decorations with colored stones, few features of the building was splendid spread over an area of 4 acres. But it earned a lot of criticism from french writers and 2 colonial bicyclists after which there were additions in the building but finally the palace was converted into Udaipur's finest luxury hotel. In 1971, Taj took over the management thus raising it to rich standards.

Jag Mandir- This place is also known as the "Lake Garden Palace". It is known for its grandeur and the main entrance which is marked with the sculpture of eight elephants. Approachable only by boat makes the journey to this place remarkable.

Mohan Mandir- Built by Jagat Singh in 1628-1652, this is an uncomplicated structure with features of a temple but with no deity. Named after one of the official sons,Mohandas, the temple got its name from there. It is one of the places from where the King would watch the famous Gangaur festival's celebration.Today it is used for display of fireworks for Gangaur or Mewar festivals.

Arsi villas- It is an exclusive island located behind Jag Niwas. Built by Maharana Arsi Singh, the place has been named after him. It was designed for him to view the sunset amidst the lake. It also has a lower platform at the back side for the purpose of helipad when required. It also houses a famous bird sanctuary.

Getting to Lake Pichola

Lake Pichola is only accessible by boat as it is in Udaipur, it is easily accessible and well connected with railways and roadways. The nearest airport is the Dabok Airport.

July to September is considered the best time. Since Rohtang pass serves as another entrance to Udaipur, it is  closed in the remaining months.

Lake Pichola has luxurious hotels that offer accomodation but budget hotels are available only in Udaipur around the lake.

Lake Pichola is the major attraction but there are few more places like Fateh Sagar lake,Udai Sagar lake, Dhebar lake and Gulab Bagh and Zoo around Lake Pichola which are within close vicinity.