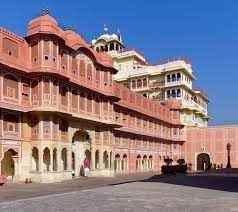 The city palace in Udaipur can be considered as one of the most fascinating place in the city to explore. This is a formal royal residence of Rajputs, hosting almost all the facilities to attract every kind of travelers to it. The city palace, one of the best architectural master pieces in the Rajasthan state was constructed by Maharana Udai Singh in the 16th century to use as the nerve center of administration of the Sisodia Mewar clan. The city palace constituting many royal buildings within it was raised at the east bank of the Pichola Lake in Udaipur.

The architecture of the city palace in Udaipur is a combination of the ancient Rajasthan architecture and Mughal architecture. The method followed for the construction of this building is called flamboyant and the city palace can be considered as the largest structure built in Rajasthan in the flamboyant style. This fully furnished palace offers a beautiful view of the neighbouring tourist attractions like Lake Pichola, the Jag Mandir and the Monsoon palace from the balconies of the city palace. The Mewar Trust formed by the successive Maharanas of Mewar controls the palace after India became independent.

The Selection of Site for the City Palace

It is being believed that the place on which the city palace in Udaipur is standing was chosen according to the advice of a hermit, who was meditating in the Udaipur hills when the Maharana of Mewar Udai Singh had hunting on the hill. The hermit blessed the Maharana and advised him to build a palace on the spot where they met.

There is a museum operating in the majestic city palace of Udaipur to display the priceless artifacts and attractions of Mewar dynasty. Some parts of the city palace and the Ladies Chamber (Zenana Maha) were taken to host one of the best museums in the city of Udaipur in 1974. There are so many portraits of Maharanas showing different kinds of mustaches in this museum. There is also a beautiful white pavilion, which is called as ‘Lakshmi Chowk' in the list of attractions in this museum. The interior of the city palace museum is very attractive with the priceless artwork which portraits the history before Udaipur got its first camera. This museum stretches 33 meters high and 333 meters long and 90 meter wide. One of the major specialties of this museum is that it was created to hinder enemy attacks.

The City Palace in Movies

The city palace in Udaipur also had to be the background for many Hollywood and Bollywood movies. The city palace in Udaipur was casted as a luxurious hotel in the James Bond series movie released in the year of 1985. A documentary film directed by Werner Herzog in the year of 1991 also shows a theatrical performance held in the city palace by the famous artist Andre Heller. Over the past decades, so many Bollywood movies were shot here and the movie released in 2013, Yeh Jawani Hai Diwani is the last one in the list.

The city palace comprises many wonderful palaces which are built by different rulers and still they reflect each other. The chini chitrasala in city palace is known for its Chinese and ornamental tiles. The mohit mahal also known as palace of pearls has lavish decor and the sheesh mahal also called palace of mirrors has inlaid mirror work. There is a hawai mahal and bari mahal in city palace with a beautiful garden build on a 90 feet high natural rock formation. Amar vilas, the highest point in City Palace has wonderful hanging gardens with fountains, towers and terrace. City palace offers a splendid view of the lake from all its balconies, cupolas and towers.

Durbar hall in city palace was built in the year 1909 within the Fateprakash palace and the official functions such as state banquets and meetings are held there. The gallery of the durbar hall was used by the ladies to observe the meeting procedures. Fateprakash palace, now run as a luxury hotel has beautiful crystal gallery that consist of crystal chairs, sofas, tables, dressing tables, chairs and beds, table fountains and crockery. Other attractions in city palace are Krishna Vilas, Mor chok, Rang bhavan and Jagdish mandir.


Things to know about City Palace

City palace is one of the best places everybody must visit in Udaipur. Here is some information that may find useful when somebody is planning a tour to this palace. The museum tours costs 50 rupees per adults and 30 rupees per child and free for kids under 5 years old. The City palace in Udaipur opens for visitors at 9:30 AM and shuts at 5:30 PM. It is closed on the day of Holi festival. It takes approximately 2 hours to completely cover this palace including the museum and the grounds.

Visitors will get the services from the registered guides offering tour in Hindi, Gujarat, English and many other languages. There are many open air restaurants in the city palace ground called Palki Ghana and these restaurants offers a wide range of menu for their guests. The perfect time to visit city palace is morning and try to reach there by 9 AM in order to beat the crowd, because mid morning and afternoons are the most crowded time.

The city palace located at the heart of the lake city can be accessed easily by road and rail from most of the towns in the state of Rajasthan. Maharana Pratap Airport, which is also called in the name Dabok airport, located 24 kilometers away from the city of Udaipur, is the nearest air port to the city palace. Daily flights are providing service from the air port to the neighboring cities like Jaipur, Jodhpur, Aurangabad, Delhi and Mumbai. Auto rickshaws, unmetered taxis, and city buses have services to the city palace and premises from different location in Udaipur city.